True Story-Revenge and the Lord 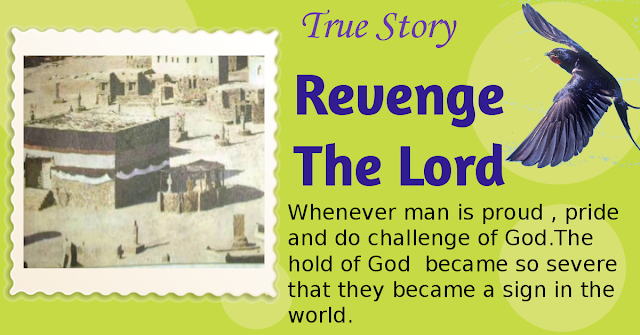 The stories of God's revenge packed into the books of the world. Whenever a man is proud, pride, and do the challenge of God. The hold of God became so severe that they became a sign in the world.

There was a large army in the suburbs of Mecca. This army was from Abraha. Who was a proud ruler of Yemen and came aboard elephants to demolish the Kaaba?

And he came and fought against every tribe that came, along the way, He was a great fear of the glory of the Kaaba. People from all over the world used to visit the Kaaba. It was a very unpleasant thing for him.

He built a magnificent church in Yemen and told the people, That instead of the Kaaba, come and worship in this church. You used to travel to the Kaaba after spending so much labor and Expense. You can avoid this labor and Expense by Worshiping here.

People did not listen to him, and all year long people, went to Mecca to perform Hajj and visit Kaaba. Arabs were idolaters, But the teachings of the Prophet Abraham and Ismail (peace be upon him) and the glory of the Kaaba remained in their hearts.

On this declaration of Abraha, he expressed severe Indignation, And he went to church in Arabic rage and entered it and made it dirty. According to various scholars, he set fire to some parts of the church.

Finally caught, Abraha asked him why he such a move?

This Arabic said: As long as the Kaaba is present. No Arabic will come to your church.

Abraha sentenced him to death and said, "I will destroy the Kaaba."He had camped on the outskirts of Mecca with an army of about 100 elephants and 1000 horses.

He summoned the chiefs of each of the tribes of Mecca to him and said to him, 'Fight me or be neutral. That night all the Chiefs had an important meeting, and it was decided that we could not fight the army of Abraha together.

Because seeing elephants, our horses and camels retreat for fear. And if the infantry were at war, the elephants would trample them.

So we all have a unanimous decision that we should all be hiding in the mountains and have the Kaaba entrusted to Allah because only Allah can safeguard this Ka'ba.

The decision was made that night and in the morning several camels of Hazrat Abu Talib.

The Uncle of the Prophet (who was not born at that time) was walking in the desert. Abraha's army kidnaps them.

When the news came to Abu Ta lib, they went to Abraha to get their camels. And he said, "O Abraha, your soldiers have brought my camels with me.

Hearing the words of Abu Talib, Abraham laughed loudly and said, "I have come to destroy your Kaaba, and you are thinking about your camels."

Do you not worry about the destruction of your Kaaba? Abu Talib said that I am the owner of my camels, and I am worried about my camels. God is the owner of the Kaaba. Then God is the One who will protect it.

Before the war, troops of Ibraha celebrated all night with a celebration of youth, eating and dance, server. It was only a While Ago, That the cries of the dog's-cry and the horses whinny to sound.

As if they were expressing pain or suffering. Or they have seen a coming disaster. The soldiers went to their elephants and horses and saw these animals clapping their feet on the ground and trying to smash his ropes.

Prisoners in the cages were crying out loud. Abraha and his soldiers were upset to see all this. Abraha understood that something was about to happen to him. He overcame his panic and announced that Tomorrow, we will destroy the Kaaba.

Morning white was appearing, and Abraha's army was a hundred yards away from the Kaaba. There was a whole flock of strange birds in the sky that could not be counting.

He kept wandering in the sky for a while, and after that, he gravels rained down on Abraha's army.

These gravels would hardly be half an inch. But their strength was more than today's ammo and bullet.

They would cross over to every creature they fell into Elephant camels, and soldiers were able to stand in front of him for a moment. See this Abraha's army scattered in the fields and tried to escape the birds.

Someone hides under a tree, behind a rock Someone was seeking shelter in the caves, but these birds found them everywhere and used to kill death. Within a few hours, Abraha's army had vanished except for a few.

Abraha was also injured, and his pride had gone away. The ruler of Yemen and the owner of a Multifunctional army had defeated a bird that was only equal to our palm.

Some of his soldiers and slaves picked him up or took him to Yemen, and his condition was that his body was mixing with water. The story of his tragic death still exists in Yemen's books.

The people of Mecca were hiding in the mountains and watching the battle. But strangely, the birds were also watching them, but they did not throw any gravels at any of them. It seemed that they recognized every soldier of Abraha's army.

What was even more surprising was that when the people of Mecca came down from the mountains and approached the dead army of Abraha, and he lifted the stones and saw, So the Stones were Normal. But on those stones, The name of the dead soldier was written by his father.

When people saw this bird from the top of the hills, they saw three rocks near each bird. One was caught in his beak and two at his feet.

It is fully mentioned in Surah Al-A'fill in the Qur'an and said that these stones made them like Eaten straw. You may have seen them in the belly of the sacrificed animal.

Man must not forget that the Greatest power is God. How much can he Development?

There is a bubble of water in front of the Power of God. Which burst as soon as the finger Struck.

Today we have seen the so-called superpowers of the world being tunnels before God. A great example of this is the Coronavirus, which has killed hundreds of millions of people in a few days, and superpowers except they couldn't do anything to save their lives.