Mother's Day and our responsibility 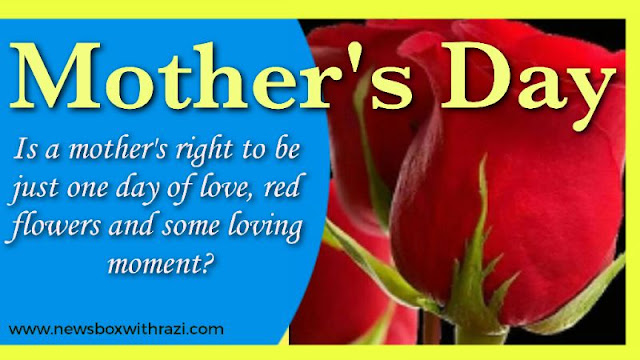 The importance of Mother's Day

Mother's Day and the western world

The whole world is not yet in agreement on its history. Globally, this day is celebrated on different dates in different countries.

This day is celebrated on the second Sunday of May in most countries, including Asia and the Gulf.

The purpose of celebrating this day is to express the importance and love of your mother, to spend time with her, and to make her happy.

The initial arrest of mother day celebrated Greece, Greece was the first country.

Where the first day was celebrated first, during this spring festival, it was honored with the mother of God, Rhea, in the world.

In the 13th century, "Mothering Sunday" was celebrated in honor of Mother Mary during Lent in March / April.

Similarly, in the 17th century, the UK dedicated one Sunday Day for the mother Day, which was named 'mothering Sunday',

On that day, the servants working in special homes were given a day holiday to the mothers.

While his initiative in the United States was in 1900. A girl in the American state Philadephia, whose name Anna M. Jarvis and he was a school teacher, started regularly to celebrate this day regularly in 1907.

He highlighted the movement of celebrating this day in the memory of his mother An Maria Reveys.

Its movement was spread from the US state of Philadelphia and spread across the United States.

Thus seven years later, in his memory, his mother started regularly in the United States. In 1914, President of the US Wood Rollason was very appreciated by Anna M. Jarvis.

And on May 02 (Mother's Day ) was celebrated as a national holiday under the end of its efforts.

The ceremony took place in a church in the United States. On this occasion, Anna M. Jarvis presented her mother's favorite flowers at the ceremony.

On this movement, Wood Rollason (28th president of the United States ) declared the second Sunday of May as National Day in honor of mothers.

This day is then celebrated on the second Sunday of May every year. For this reason, this day is also called Mothering Sunday in the UK.

Islam has no concept of Mother's Day. Islam obliges everyone to fulfill the rights of parents that Islamic law has imposed on all Muslims.

The short answer to this is that in Islam, every moment and every day is Mother and Father's Day.

To further understand this concept, a verse from the Holy Qur'an and a few hadiths are presented in the context of respect, reverence, and service of parents.

And your Lord has decreed that you worship none but Him, and be kind to your parents. If one or both of them reach old age in your presence, do not say oof in front of them, do not scold them, but talk to them politely and ctfully.

Hazrat Abdullah bin Amrim (may Allaah be pleased with him) said, "A man said that in the service of the Prophet (peace and blessings of Allaah be upon him).

I migrate to you and allegiance on jihad and ask for His reward from Allah.
You said: Is there anybody from your parents? He said: Yes, but both are alive.
You said: "Are you a reward for Allah?" He said: Yes. You said: Go to your parents and be with them better.

How much importance Islam gives to the elderly members of the society, and places great emphasis on treating them kindly and gently.

Orders to treat older parents with the utmost compassion


The importance of Mother's Day

Mother is a great gift given to God, as he sent it to the world. This is the entity that provides a way for a child to come to the world.The baby keeps in the ninth month in the mother's stomach, mother Feel the Fatal pain and brings the child into the world.Even the end of mother's pain doesn't, But for two years it feeds her milk, The child has any problem, a mother wakes up all night, It is also a mother's Responsibility to manage its needs, such as food, clothes, and medicine, and he does not take any cost of these services.Is a mother's right to be just one day of love, red flowers, and some loving moment?The real concept of Mother's Day was not that they should be removed from the lonely and people in the old age Instead, stay with themselves, be made memorable on that day.But the truth is very different. When parents need high care and a child's love at the last age.At that time the children admit their parents to the old home and go to them on one day of the year, The gifts, foods, and drinks and take a red flower.


Mother's Day and the western world

This day is celebrated on the day of the world, people offer gifts to their mothers and meet the old home to meet them. So these older mothers are waiting for this day in the old home.
In many areas of Europe, including the United States, Old parents are kept in the old homes instead of homes. Therefore, people go to meet their mothers in Old Homes and offer them red flowers.
Those whose mothers are not in this world, they go to the graves of their mothers with white flowers and decorate this bouquet.
There are different days to celebrate Maday in many countries, but this day is celebrated on the second Sunday of May, in America, Australia, Denmark,  and Belgium.
Mother Day Festival is celebrated in Asia and the Gulf state, on the second Sunday of May.

A mother loves so much from his young children as much as Childhood, But children are young and they do not give time, They lose their Hobbies like this.

We need, plan for Mother Day's events, By the way, your parents in your childhood celebrate your birthday

Because it's the day when you can remember your childhood and young beautiful events with your parents.

When your mother used to take care of you and laughed with you, was playing.

The most unique part of the Mother's Day celebration is that you celebrate it with your family.

On this day, present your card, the flower baskets, and the small gifts according to your mother's wish and choice.

From which they have joined their own and your childhood memories.

My prayer is all your parents always be alive and stay with you.