What is Eid-ul-Adha? The Facts About The Festival Of Hajj and Sacrifice 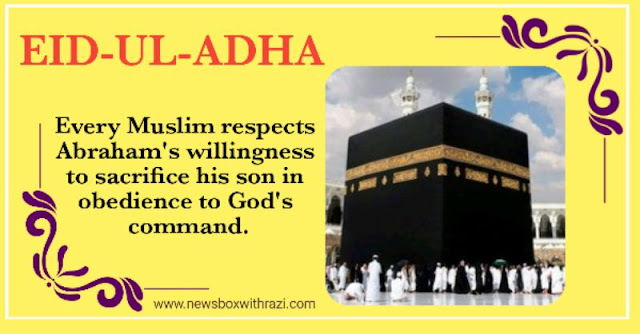 
Two Eid festivals of religion in Islam are very important, in which the Eid Fifth is also called sweet Eid. Shawwal of such Islamic month (which comes after Ramadan)

While the second Eid is called Salt Eid or a big eid (Who comes after the Hajj ). Hajj rituals are performed till the 9th of Dhu al-Hijjah, after which the pilgrims sacrifice animals and open the ihram.

All the Muslims in the world who are not performing Hajj this year perform Eid prayers and after that, they sacrifice animals in the way of Allah.

In fact, Eid-ul-Adha means "Eid of Sacrifice". This teaches us the lesson of life and financial sacrifice and In this Eid, the sacrifices of Abraham and Ishmael are repeated.

The rituals of Hajj are performed before Eid-ul-Huda. Allah has made Hajj obligatory on every rich Muslim once in a lifetime.

All the duties of Hajj remind us of the sacrifice of the companions of Hazrat Ibrahim (as).  All his rites and duties are the same as those he went through in his life.

Just as Hazrat (as), seeing the intensity of Ishmael's thirst, had made seven rounds in search of water between Safa and Marwah.

God commanded Abraham to sacrifice his dearest thing.  Which was his beloved son Hazrat Ismail (as).

And when Abraham (as) mentioned this command of God to Ishmael, he agreed to sacrifice himself in the way of God.

Abraham took his beloved son to the altar. On the way, Satan tried to seduce Ishmael (as) and persuaded him to give up this sacrifice.

Ishmael (as) told this to his father Abraham(as). Abraham (peace be upon him) told Ishmael (as) not to be deceived by Satan and throw stones at him.

When the two reached the altar, Abraham(as)  said to his son, "I do not have the courage to turn the knife on your throat."


When the two reached the altar, Abraham(as)  said to his son, "I do not have the courage to turn the knife on your throat."

And when the knife began to move, the sound came! O Ibrahim (as), you have passed your test.


The beginning of Eid-ul-Adha.

Eid prayers were first offered by Muslims in the second year of the Hijrah. According to a tradition, the first prayer of Eid-ul-Fitr was offered by the Prophet (peace and blessings of Allaah be upon him) in the year 2 AH.

This time the Eid is coming on August 1, 2020. It will continue for five days. Due to the coronavirus, all of you should be careful about this Eid, you must follow the SOP.
So you and your family are protected from this coronavirus.

This Eid prayer should be offered in a large gathering of people and in a large and open field.
Because this is the Sunnah of the Prophet.

It has been declared obligatory for women to participate in the congregation of this prayer. In the case of the impurity of women, they only participated in the prayers.  The prayer was not offered.

It consists of two rak' ahs in which there are seven takbeers in the first rak' ah and five takbeers in the second rak' ah.  For Shia Muslims, the "Eid prayer" is different.

No adhan is given for Eid prayers.  And the sermon is recited like the Friday prayers but after the Eid prayers. Immediately after the prayer, Muslims sacrifice animals.

Allah accepted their good intentions and sent a Danba in their place so that they could sacrifice Danba in exchange for their son Ishmael.

To commemorate this sacrifice, Muslims all over the world sacrifice one animal and divide it into three parts.
One part is given to the poor and needy, the other part is kept for the house, and the third part is given to relatives.

In the Islamic lunar calendar, Eid al-Adha is celebrated on the 10th day of Dhu al-Hijjah and lasts for four days. In the international (Gregorian) calendar, the dates change every year.

One of the most important trials of Abraham's life was to face God's command to sacrifice his son. Islamic tradition identifies Ishmael as the son of Abraham who was sacrificed.

While this story is known in Judaism as the doctrine of Isaac, that is, Abraham sacrificed his son Isaac, and these are the words recorded in the Torah, the first book of Moses (Genesis, 14:22).

Abraham and his entire family had made obedience to God's will and command their goal.Therefore, God has given the status of worship to their every deed and this process will continue till the Day of Judgment.

A guide is being issued here. Quotes in this post are taken from Wikipedia and
Images were taken from  pexels.com
RELATED POST
100 Best Christmas Wishes Father's Day Mother's Day  What is Eid-ul-Adha 50+Eid Mubarak What Happens When 15 Million Balloons Flown Air Best Holi Messages Holi Festival 2020 Mid-Sha'ban Shab E Barat The Real Story of  Valentines Day  what is Christmas