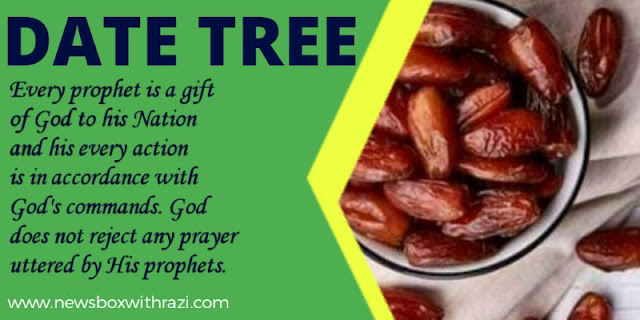 Best Miracle of the Prophet (PBUH)

Every prophet has shown miracles to his people. Most miracles were limited to a certain time and place. But more than fourteen hundred years have passed, this miracle of the Prophet (peace and blessings of Allah be upon him) is still alive today and people are benefiting from it.

Once a Jew from Medina offered a palm frond in the service of the Prophet Muhammad (PBUH). A Jew came to the Prophet (PBUH) with a palm seed.

And he said, "If you are a true prophet of Allah, then I bet that you bury this seed under the soil and water."

And by tomorrow morning this seed will be a strong palm tree. And if ripe dates come on it, I will believe in your religion.

It may be his mischief, but the strongest hope is that he wants to test the Prophet's (PBUH) prophecy. Just as the Jews have been testing their previous prophets.

And whenever a prophet passed their test. So instead of acknowledging the miracles of the Prophet, they would infuriate him and liken his action to magic.

While our last Prophet(PBUH) is related to Ishmael, the first child of Ibrahim (peace and blessings of Allah be upon him). When the Prophet (PBUH) heard the bet of the Jew, a smile appeared on his face.

While the whole assembly, including the Companions, was astonished. They were all wondering how this was possible in one day and one night.

That a palm tree may become a strong tree in one night. And be fruitful. Surprisingly, there was no palm season at that time.

But they did not know, this is the Messenger of Allah who split the moon in two at the very beginning of Islam at the request of the infidels of Makkah. And after a while, the moon came back to its original state.

It was a miracle that no one had seen before, nor will it happen again. He asked the Jew, "Tell me where to sow this seed."The Jew pointed to the place of his choice.

The Prophet called some of the Companions and dug a small pit with them. The earth was leveled with the seed of the palm tree, which the Jew had given him, and he poured water upon it.

O Allah, no action is impossible for You, You can do all things. After saying this prayer, the Prophet (PBUH) looked at the Jew and smiled and said, "We will meet again tomorrow morning."

Saying this, the Prophet (PBUH) walked towards his house.

And he was worried that this might not happen tomorrow. To dispel his whispers, he went to the place where the palm seeds were sown in the dark of night.

And he quietly took the seed out of there and returned home thinking that no palm tree could come out now.

The next morning some people came to call this Jew and said that the Prophet (PBUH) remembered you and they reached the place where the palm seeds were sown at night.

The Jew was amazed to see a tall palm tree standing there with many fresh and ripe dates on it.

The Prophet (PBUH) smiled at the Jew and broke a palm and gave it to him
As soon as the Jews ate the palm, they shouted and said! There are no seeds in this palm.

The Prophet (PBUH) said: You took out the date palm seeds last night.
However, there are palm trees and palms according to your wishes. The Jew, seeing the miracles of the Prophet, believed in him and joined the Muslims.

After this incident even today seedless dates grow in Madinah. The real name of this date is Sukhal or (Sukhl).

Every prophet is a gift of God to his Nation and his every action is in accordance with God's commands. God does not reject any prayer uttered by His prophets.