The Effects of Parent Training:

Remember that parent training comes with the last breath of life.”Not only education in the journey of life, but civilization also has its own place. ” 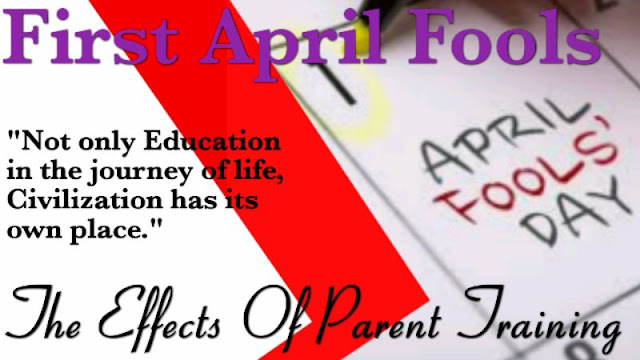 Robert had reached the age of 21. after graduation, he had now begun to look for a job. He was a liberal and open-minded young man and he wanted to live his life freely.

But his biggest obstacle to his life was his parents. From his ever-present hindrance, he was a great displeased.

He wanted to sleep long, travel around the world, and make many friends. The best clothes, expensive perfumes were needed.
I wanted to keep up with the high society boys and girls. But his parents would not allow him to live his life.

Her parents belonged to a lower-class family. Where such wasteful expenditures and there is no room for a carefree life.

His order was to return home before sunset. Get up early in the morning. When preparing for a bath in the morning, the rule is? First fix the bed linen and then go to the bathroom.
Exit the bathroom then the decree begins. Is the faucet closed properly? Is the towel in the right place or just thrown away?

Thinking of leaving the house for breakfast, then scolded, what is AC off or running? From waking up in the morning to falling asleep at night I have become obsessed with the admonitions.

In fact, he had become obsessed with this life, thinking he would leave home if he got a job. He had applied for a job in several companies. A few days later he received an interview call from two companies.

One of his best friends was already working at a company. Robert told his friend that I had an interview call from your company.

You tell me what that company is like, and will this company be better for me? His friend said the company is really great but its owner is very strict.


It doesn't like anything against discipline, So to get a job here you have to follow discipline.

Robert found this outrageous. He was already a reckless man. This job wasn't suiting her in any way, But he still went on to interview.

He was interviewed by the Assistant Manager first and asked about his education and previous experience.

And finally asked what salary he would accept. Because Robert didn't like the job, So he deliberately his salary to write more.

So that the company wouldn't call him to interview again. The assistant manager also told him that the salary was too high.

And the manager of the company will not exclude it. But he insists he needs just as much Salary.

Because he wanted his request to be rejected because of more Salary. He then went to another company for an interview.

But here he was completely unsuccessful in the interview.  Because his education here was less than other people's.

So he thought he would keep trying and get a good job very soon. But not long after, no company has called for an interview.

One day he was sitting with his rich and wandering friends and was complaining to my parents about how they instructed me to lead a disciplined life.

Friends say that you desperately need a good job for your convenience and comfort. So you can fulfill your wishes and live a better lifestyle.

Therefore, Do not waste any job offer now. When you are in the office from morning till evening.

So the attitude of the parents will change, and at the same time continue to look for the second-best job.

Robert said that you guys don't know my parents. Even after getting a job, their behavior will not change.

I still have to work after I get a job. His friends said you had two months. Find a small job in those two months.

And live in the city and then find another job while staying at the job. Two months later is the month of April. During this time you have found a job.

Then leave the house quietly, This will be an April Fool for your parents. You know how many boys and girls run away from home in the month of April.

He liked the advice of his friends. He applied for a job in several companies.


He also received interview calls from some companies. but some companies were paying him less, and in some places, he had little education or experience.

Time was running out and he was still unemployed, now his anxiety was increasing. He wanted to get a job as soon as possible.

One day he got a call from three companies for a final interview. Surprisingly, that company was also involved. where he demanded more celery and he was convinced that the company would never hire him.

He was thinking of leaving the house, I wish! If I succeed today, I will immediately say goodbye to my old home.
And stay here in the city. Parents' daily advice will miss life!
Many candidates were sitting in the office waiting for the "boss" to arrive. At nine o'clock the boss reached the office.

When it was no longer needed.  When he remembered his mother, he lit the light. Water was dripping from the water dispenser in the hall, No one had closed the tap completely with water.

Therefore, the water was now spreading to the floor, filling the wastewater tub. Because he remembered his father's saying never to wastewater.

The candidates would go in and come back immediately. On finding out,That the boss doesn't ask anything after seeing the file,


Send them to the reception immediately. When he got his number, he put his file in front of the boss.

The boss looked at the file for a while and then asked, When are you joining?

He was surprised at his question. Then he remembered, Today is April 1st and they are making me a 'fool'.

Thinking, he smiled, The manager noticed and scolded his. It's not April Fools, it's reality.

The manager returned his file, and said! Go to the reception and get an appointment letter.

He asked what kind of interview it was? There is no question asked and a direct appointment letter is being given.

In today's interview, no one was asked. Only CCTV has seen candidate behavior.

All candidates came, but no one turned off the tap or the lights, except yours. Also, your addiction and dismissal, Setting.

And your dress and talking style has also been chosen by looking closely at the camera.

Congratulations to your parents, who have taught you the difference and civilization. A person who doesn't have a Self Discipline, no matter how smart and clever,

Management and the race for life cannot be fully managed. After all this was done, he was completely settled.

I will apologize to my mother, father when they get home, and tells them. That was the first test of his life today.
And the lesson I learned from stopping and averting at their little things. My degree has no value against them.

Remember that parent training comes with the last breath of life.”Not only education in the journey of life, but civilization also has its own place. ”

If you like our story, or if you feel there is something wrong with it. please indicate in the comments box.

So that we can fix this error as soon as possible, we look forward to hearing from you.