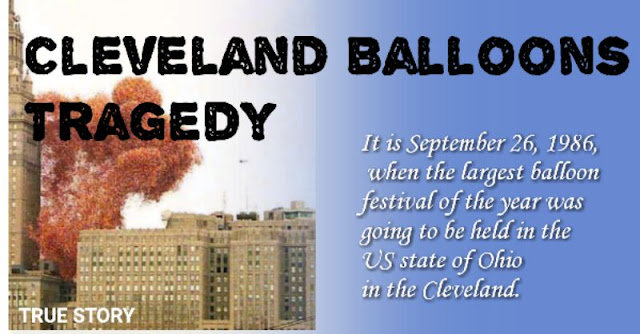 What happened?  When 1.5 million balloons were flown in the air

A balloon festival that devastation continued in the US state of Ohio for several weeks.

It is September 26, 1986, when the largest balloon festival of the year was going to be held in the US state of Ohio in Cleveland.

A large charity in the United States called the United Way Charity organized this balloon festival and it took 15 weeks to plan the festival.

The purpose of the festival was to organize a home for the homeless.  For this he was collecting donations.

The second goal was to fly two million balloons simultaneously.

And the name of the event was to be listed in the Guinness book of world records.

And all over the city came to Center Square Park to see the festival.

And besides, the citizens were busy in its preparation. A Three-story building as neat as a structure was built to store two million balloons in downtown Center Square Park.

The city's 25,000 volunteers or ordinary people sat for a night and a day at Center Square Park and gasped in balloons. These people joined the festival voluntarily.

And his job, too, was to fill the balloon with helium gas and collect it underneath the Net. On September 26, that balloon was supposed to be released into the air.

On that day, the weather forecast and rainfall was reported by the Meteorological Department a week ago.

So in the afternoon, when only 1.5 a million balloons were ready, the clouds were roaring. And the light rain had begun. There were dark clouds over the sky.

And the colorful balloons in the background of the clouds provide a beautiful view. But no one knew what the risk of sharing a gas balloon and this season could be.

Because it was going to happen for the first time. Never before had such a large number of Balloons been flown

And then at one o'clock fifteen minutes of the day, the net was opened. And 1.5 million Balloons fly towards the sky.

When the 1.5 million colored balloons flew into the air, the view was a big surprise. Millions of people were enjoying the spectacular view.

And the sky was also colored by these nude balloons. But this scene was only for a few moments.

It was thought that fifteen million balloons would fly into the air and disappear into the sky.

But suddenly the storm started to rain and with the rain and wind, all the balloons returned to the city. We all know that helium is lighter than air.

Therefore, when helium gas is filled in the Balloon.
So it rises upward in the air because of the lightness of this gas.

But because of the strong rain and stormy winds, the balloon could not reach the sky. And they came back into the city and scattered everywhere.

And shortly the city's railway station, the road and the streets were filled with colorful balloons and in some narrow passages the mountain of the balloon had become.


Streams drain and all open space were filled with colorful balloons.

They continued to jam traffic on Balloon Road and caused many accidents. As a result, many people were injured and the property was damaged.

The city's airport was closed soon after seeing these conditions. And domestic and foreign flights were canceled.

Thus, the city's system was shaken for several weeks, and the responsibility of the United Way  Charity became. And the company also had to pay a woman $ 2.3 million.

Because the woman's husband and his a friend were catching fish in Lake "Lake Erie".

That his boat was hit by an accident. The rescue team had arrived in time to rescue them.

But the whole lake was filled with colorful balloons. This made it difficult for the rescue team to see them both in the water.

And despite the rescue team not receiving timely help, the two men were drowned. So the Cleveland court ordered the United Way Charity to pay the woman two points three million dollars.

Thus, the Festival could not be included in the Guinness Book of World Records, In fact, A new name was recognized in the world by the Cleveland Balloon First Tragedy.