COVID-19, Raise Awareness Among The People 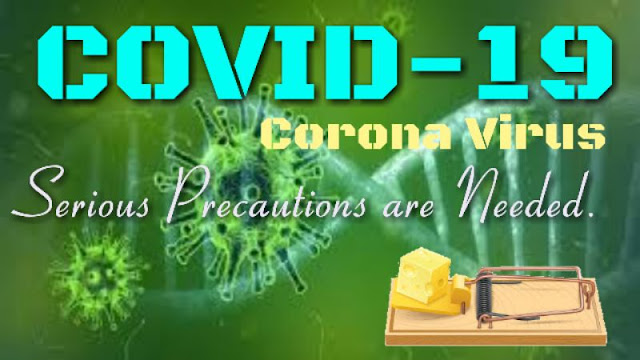 COVID-19, Raise Awareness Among The People


The Coronavirus has become a global and pandemic. The world's largest and most developed countries are hit

So now is the time to fight this disease, we have to raise awareness among the people. Otherwise, it will destroy our political, social, religious landscape. One little story will be enough to awaken your consciousness.


There used to be a mouse and mice living in a farmer's house. After a few days, the mice gave birth to seven children.

As children we're growing older, their dietary needs were also increasing. So the mice started cutting the house thing.

Cut off everything and see if it can feed her children.
Fruit, vegetables cut out paper and household items, and make sense of it.

If she was not able to eat, she would have left it that way. Thus everything in the house was getting worse.

The farmer's wife told her husband that there were more mice in the house. Some of these mice should be dealt with.

Otherwise, this mouse will spoil all the belongings in the house. The farmer told his wife, "I Seek advice, my friends, what to do."

In the evening he went to his friends. He told him there was more mouse in her house.

You guys advise me on what I should do. Some people advised him to poison a rat. While some said that the poisonous pill would cause harm to the people in the house as well.

And if the mouse dies in an interior part of the house after taking a poison pill. So it would be very difficult to find it. And until the dead mouse was removed from the house.

Then the odor of the house will spread, Therefore, the mousetrap will be better. So the farmer bought a mousetrap from the market and returned home.

And he gave the mousetrap into his wife's hand and said that now it will solve your problem. The farmer's wife pulled the mouse trap out of the box.

And checked it several times by reading the usage instructions. And satisfied that he placed it on one corner of the house. The mice were watching the whole scene with his bill.

She was frightened and told the mouse all this. The mouse said we should leave this place. Because we will be saved wisely.

But the kids are foolish right now. They will easily fall prey to it. So it is better to leave this house. The rat said goodbye to the house with his wife and children.

And headed to an unknown location. On leaving the house, mice approached the Cages and told the pigeons. You have to be careful that a mousetrap has come into the house.

The pigeons said, "We live in this cage, How do we relate to mousetrap? mice also repeated this when approaching the hen coop. The mousetrap has come into the house, You guys also avoid it.

The chickens said that we live in the yard outside the house. So we don't have to be afraid of the mousetrap. After some distance, the flock of goats was found.

mice repeated his words and also told them that a mousetrap had arrived in the house. You should worry about that too. The goats laughed and said, "We are so big."

That the mouse trap can't harm us. And we go out to graze in the pasture. We don't have to worry.

At night the farmer's wife's eyes opened. He saw a huge snake trapped inside a mousetrap clip. And the mousetrap is running around in the house to get out.

The farmer's wife tried to kill him, but the snake bites him. She screamed and became unconscious.

The farmer's eyes also opened with the sound of his wife screaming. He killed the snake. Immediately go to the village doctor and tell him about your wife's condition.

The doctor gave some medicines and asked him to give pigeon soup. So within three days, all pigeons were finished making soup.

And every day these people were coming to support the farmer's wife. The chickens were being cut for their banquet and within a few days, the hens would be gone.

Within a few days, the farmer's wife passed away. On hearing this news, relatives and all the villagers gathered at his house.

After the burial of the farmer's wife, goats were cut off for people to eat. That is how the whole flock of goats ended.

The whole mouse family started a happy life in another house. They are aware of the danger and have moved themselves to a safe place.

But even those who did not know the danger made fun of it. And, with negligence, he lived his life, A minor mouse trap became a victim.

If seen, the story that pigeons, chickens, and goats had nothing to do with a mousetrap.

But these people suffered the most because they were part of this society.

The Coronavirus is like a mousetrap for the world. A small virus that killed millions of humans. You should not treat this story as ordinary as the characters. But rather prevent it.

Coronavirus is a dangerous virus that does not appear for several days. Now the question arises how does a person know if he gets the virus. It has been infected with the Coronavirus.

Unfortunately by the time the virus gets to the doctor, 50% of his lungs are gone. For this, you can do a simple test.

If you do not have the Coronavirus this method can not 100% confirm the Coronavirus. But there is nothing wrong with doing this test twice a day and tell others.

Never allow your throat and mouth to dry, After every fifteen minutes, no Liquid should go into the mouth in every situation.

Doing so will not prevent any virus in your mouth or throat, Rather, the gastrointestinal tract will digest. If you do not, the virus will enter the lungs through your respiratory tract.

Please forward this message to your maximum number of dear friends.

RELATED POST
Work From Home, How To Balance In Ramadan And After? Corona Virus And Social Prevention Campaign COVID19, Raise Awareness Among The People  *