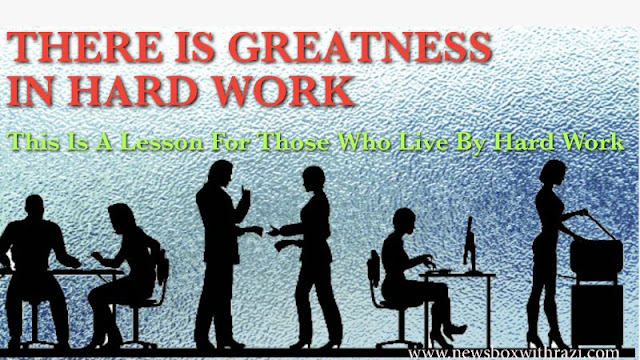 THERE IS GREATNESS IN HARD WORK

Sometimes there are situations in a person's life when he gets bored with his life and wants to end his life.

Poverty, Unemployment, and disease are conditions in which a person feels compelled and helpless.

Some people have a temporary problem, but in a few days, They can solve the problem.

While some people suffer from these problems for a long time, and there is no solution to these problems, which leads to frustration.

One such incident is that of a poor man in the time of Moses.

A poor man was very worried about his poverty and unemployment, he did not understand how to live in these conditions.

He lived alone in a small hut and had never been married due to unemployment.

Finally one day he thought that I have no purpose in life, why don't I jump into a river and commit suicide. Thinking this, he walked towards the river.

On the way, he saw Moses, who was preaching and admonishing the people.

The poor man also sat among the people to listen to them.

Moses said that God did not create any creature without purpose.

This poor man listened to him and thought that I am also a servant of God, he will also provide me with my destiny.

Why don't I try this promise of God, thinking he lay down by a river?

And I promised in my heart that I would not leave until God provided me with my share of sustenance, even if death befell me.

A day and a night passed, but he found nothing to eat, and he was hungry, But he still hoped that God's promise would come true.

The next day the sun had risen, and he was starving.

He seemed to be dying. But it was not long before he saw something flowing in the river.

He watched the object approaching him with joy and amazement, and dared to approach the river.

As he approached, he saw that there was a little dessert on one of the leaves. He was very happy.

He was convinced that he could get sustenance without hard work. He ate and drank and went to bed again.

And he waited for the sweets and the next day the same thing happened.

He thought to himself, I don't need to work anymore, God created me, He will also give food there.

But on the third day, he kept waiting but the halwa did not come as usual. Finally, after waiting for a long time he started walking along the river bank.

He was hungry as well as curious as to where this dessert came from.

After walking some distance, he saw a hut. When he reached near this hut, he saw an old man sitting.

Both of his feet were swollen due to some disease, and he was putting hot sweets in both his feet.

And when the sweets had cooled, he put it on a leaf and threw it into the river.

The poor man was watching all this and was very surprised, he couldn't believe it.

He went to the old man and asked him;

O old man, why are you throwing these sweets in the river?

The old man saw this poor man and smiled and said;

Old age causes pain and swelling in my feet, due to which I cannot walk and do my necessary work.

A doctor has said that you should warm both your feet with hot dough every day, as l could not use this flour to eat after warm your feet.

I thought, So as not to throw the flour in vain, and I make sweets by mixing some sugar in it.

So that the birds and the beasts may eat it, and it may be my work.

The man was very sorry for what he had been eating for two days.

Indeed, God made His promise come true. For two days, He fed and watered me without any effort.

But if I had worked hard, God would have given me the best and purest sustenance.

This is a lesson for those who are afraid to work,

Work hard first and then trust God. God will not waste your hard work.